Wow. The last 60 miles have been some of the hardest and most rugged hiking I have ever done in my life. Add some rain and a 30lb pack and what you get is a very weary, exhausted, beat up hiker.

The northern section of the long trail is extremely quiet and other then crossing the trail with a few northbounders (nobos), we don’t see people at all.

We sing, tell stories, grunt, yell, cry, laugh hysterically, swear and release lots of deep guteral groans during steep ascents and descents. By the ends of our days we are wasted, staggering towards the next shelter dreaming about the moment we can take our shoes off and eat.

We exchange information with the hikers we do pass. We ask about water and how the next shelter or mountain is. As we got closer to the harder section there was a lot of trail lore about what laid ahead. Every hiker had a different story. Some of the young macho dude bros would talk to us as if they wanted to have a cock sword fight and say stuff was steep but no big deal etc.  Others shared that the rain on the steeper terrain made things really slick and treacherous and that they had fallen a few times. A handful of men in their 50’s told us they had never been so scared hiking and seemed rather shaken by certain sections and needed to talk about it and we listened.

Last I wrote I had made it to Jeffersonville where Travis had a room. That next morning we walked into town, had breakfast, stopped by the post office and then hitched a ride back to the trail where we started ascending Whiteface Mountain. It was a rough climb of 7.5 miles with over 3000 ft of elevation gain. The rain started up again and just as I had been clean and dry I was now wet. Up and over Whiteface, we found our way to the shelter. It wasn’t even 3pm but the rain fell harder the temperature dropped and just as we were about to press on to the next peak, we thought we’d better stay put. The wind picked up and I was already shivering. We settled into the shelter wishing it was one of those more protected four walled camps rather then an exposed lean-to but were grateful  for the shelter. I got out of my wet clothes and put all my layers on and got in my bag. Windy mist was blowing in the opening of the three walled shelter so we hung Travis’s tarp over the opening. Had a festive cozy nite up on Whiteface with flashes of lighting and rain pounding roof.  Slept well and stayed warm.

The next morning we stayed in our sleeping bags relaxing and gearing up for our next push hoping the weather would clear up a bit as forecasted.  It was noon when we decided we had to move on even tho it was still misty and rainy.  We put on our wet clothes and hiked over Madonna Peak stopping in a ski warming hut to take a short break. We pushed on to Sterling Pond and the weather shifted and the sun tried to pop out. We sang the entire soundtrack from Annie on our descent trying hard to stay upright on a very wet trail. Our goal was Taft Lodge located on the side of Mount Mansfield but given our late start we decided to stealth camp in Smugglers Notch at a parking area on Rt 108.

Woke up to clear skies and got an early start up Mansfield despite spending a good 45 minutes trying to figure out where the trail crossed the road. We powered up Vermonts highest until we reached the last chance to take a cut off trail. Mount Mansfield is like a face and is a mile long exposed ridge line with a series of sections named “the chin” and “the nose” and “the forehead”.  We were told that the chin is a steep exposed rock scramble with giant cliffs on either side. Travis has a history of freezing up on exposed scrambles and was considering skipping the chin. I once had to talk him off a boulder on katahdin where he was white knuckled and frozen on this terrifying trail called Cathedral. I wasn’t exactly calm about what was ahead but I knew I was going up the chin with or without him and we got to the final intersection when Travis said he was going to do it with me. Thank goddess. Once we got into the alpine zone we stopped for a snack and water break. I started crying. Not sure why…fear, excitement,  severe homesickness.  I pulled myself together and we headed up. The scramble was scary but not so bad and before we knew it we were on top smiling for a summit picture. We were so relieved and happy that we were practically skipping down the ridge.  The sun was shining and we had 360 views of it all. But our joy quickly turned to fear once we reached the forehead and had to descend a series of steep pitched ladders that literally made us tremble with fear. I almost threw up approaching this one spot and I wish I took a picture or video of the roughest stuff but my hands were shaking too hard to do anything but hold on for my life.  It was exhausting and terrifying and once we were down we collapsed near Butler Lodge. It was early and the sun was shining so after a short recovery break we pressed on hiking all the way to Puffer Shelter which had epic views and doing a 12 mile day in the end.

Woke up to an incredible sunrise at Puffer.  Our goal was a 16 mile hike down into the Winooski River Valley and half way up Camels Hump.  We were exhausted from our big day over Mansfield and really dragging. 12 miles later we got down into the Winooski River Valley we were starving and wiped out so we hitched a ride up the road to Richmond where we sat outside a pizza shop and charged our phones and ate salads and calzones. Then we hit a convenient store and supplemented our diminishing food bags for Camels Hump which we knew would be a big hard section. We waited for 20 minutes trying to hitch a ride back to the trail before finally getting picked up by a fellow hiker named Cara Nelson who proceeded to tell us about how her grandmother was one of the first women to hike the Long Trail in 1927. I nearly hit the roof exclaiming that I knew all about the Three Musketeers!!! I told her how I had wrote about them on my blog and that I had heard of her too! We told here where we were headed and she said maybe she’s leave us a note in the shelter.  She dropped us back at the trail and we hiked a couple more miles along the road and thru some cow fields before stealth camping along the Winooski River listening to the Beavers splashing around under an incredibly bright moon.

Got an early start the next morning following the trail along the road until it headed into Camels Hump State Park where there were warning signs about bears entering shelters and tents. We were nervous but headed in and up Camels Hump which was a relentless and incredibly rugged climb. Barely made it the top before collapsing on the rocky summit. Views were epic!!!  We hiked the longest and hardest 1.7 miles down to Montclair Glen Lodge where the bear enforcements were serious and there were lots of bear stories including one where a bear broke a window to climb into a shelter for a bag of trail mix that a hiker had left in their backpack. Fortunately there were some bear boxes installed since last summer so we didn’t have to hang our food and worry about it. Shared the shelter with a father/daughter and a pair of adorable 17 year old youth from Burlington. While we were hangin out relaxing by the shelter, Cara who gave us the ride the day before popped up with her son Carl and surprised us with a fresh cucumber, apples, and some 3 musketeers candy bars!!! How incredibly thoughtful!!!! It was such a nice evening and there was a caretaker who was super nice.

This morning we hiked to Appalachian Gap for a much needed break. We weren’t sure we could do the rugged 10.6 miles after all we’d been thru but we were ready for a shower, real bed, food, and a day off the trail to let our blisters and bruises heal. We have both taken some spills and pushed ourselves to new limits hiking an average of 10 hours a day on really rugged terrain.

We called a hiker-friendly BnB in Waitsfield and made arrangements with a super nice woman named Joan who picked us up at Appalachian Gap and greeted me with a hug even though I smell like trash. On the drive to her Milbrook Inn she told us that she’s backpacked all over the world and never has she experienced terrain as rugged as Vermont.

She gave us some bathrobes and took are foul hiking clothes and threw them in the laundry for us. We showered and relaxed and ate and tomorrow we are taking the whole day off. We will pick up our resupply from post office and scope out the town.  What a trip!!!!​ 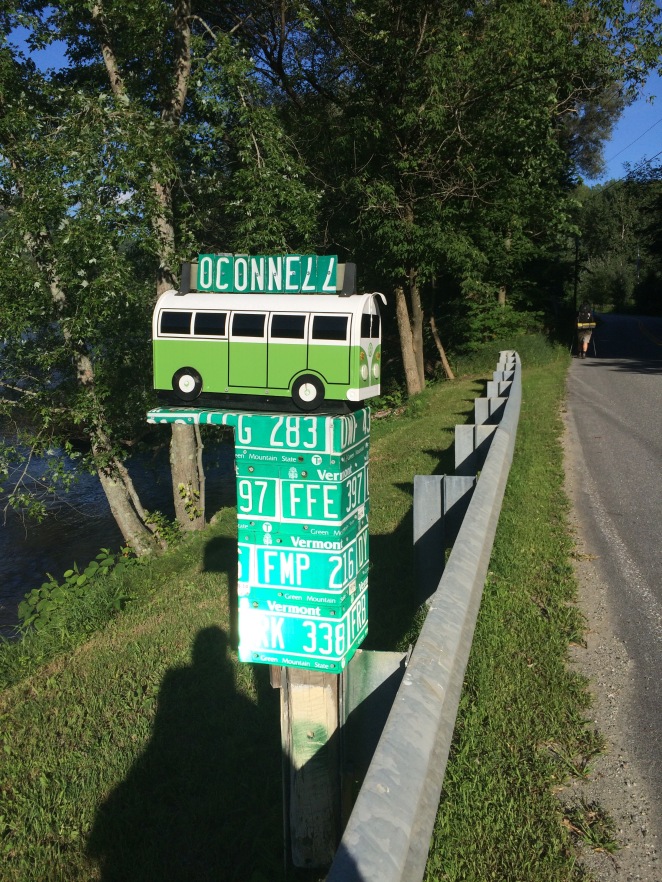 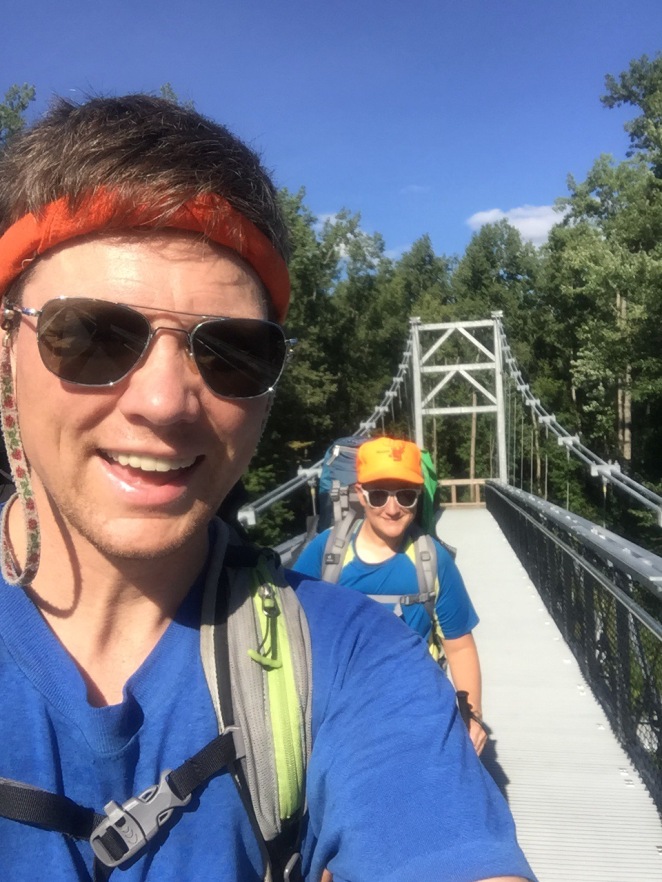 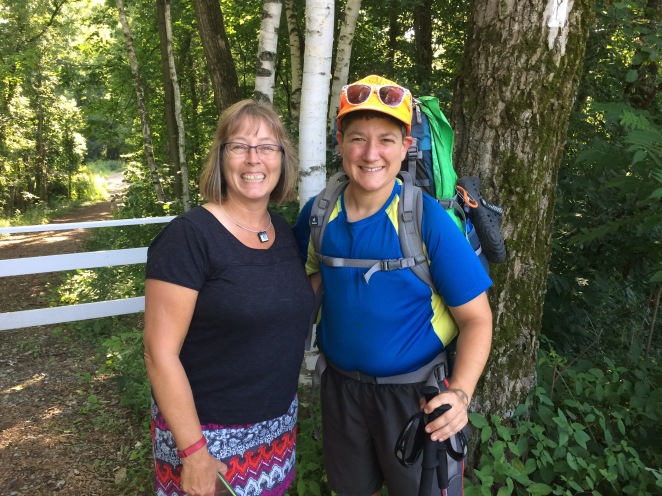 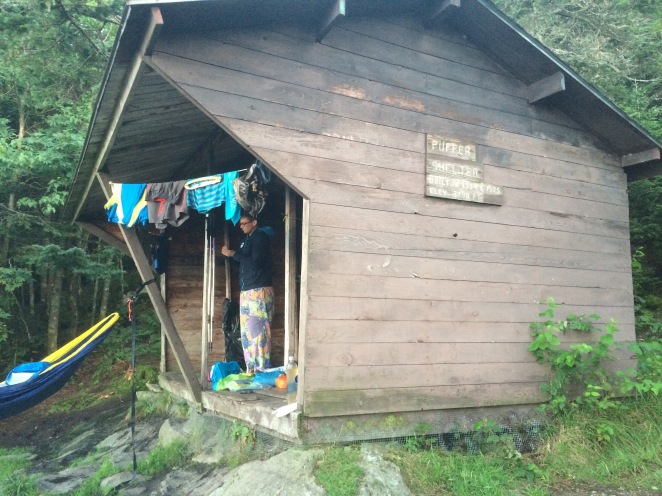 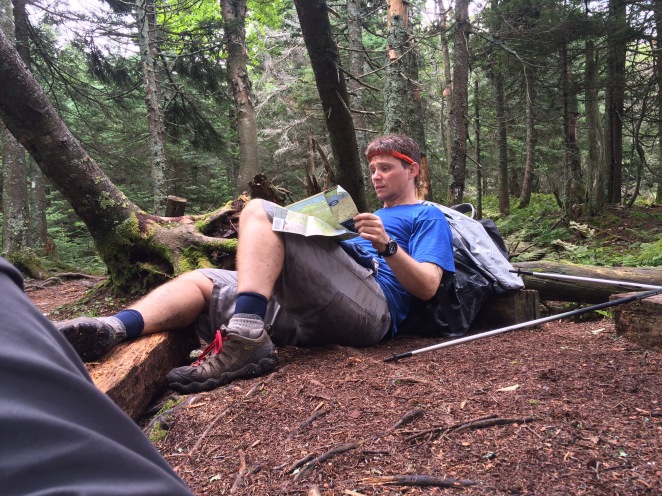 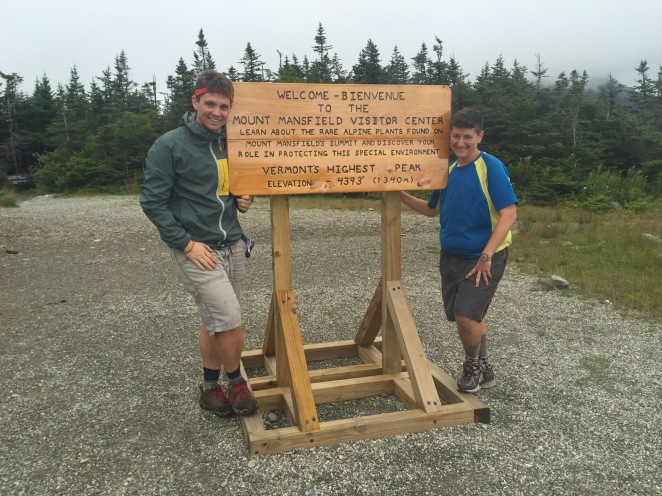 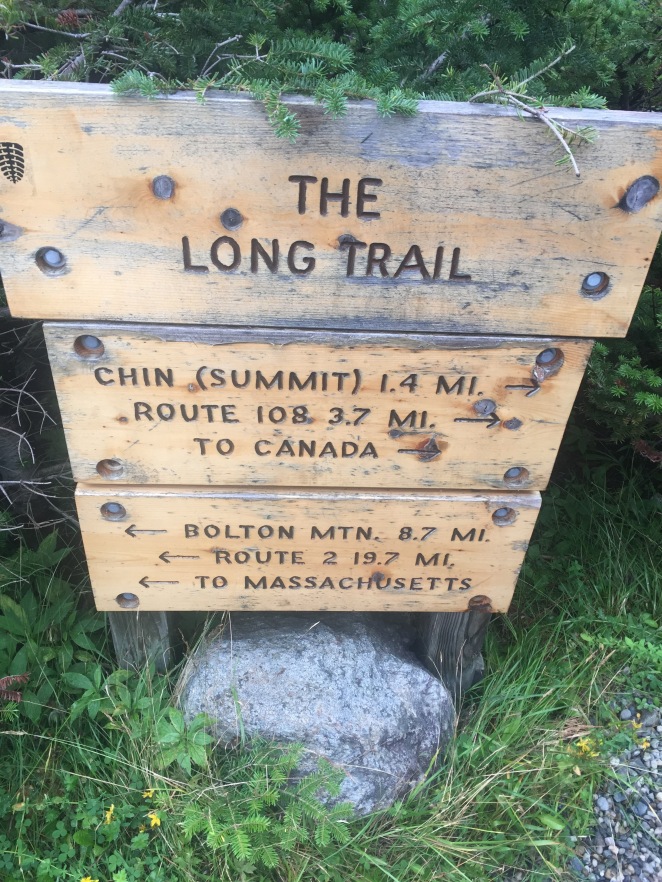 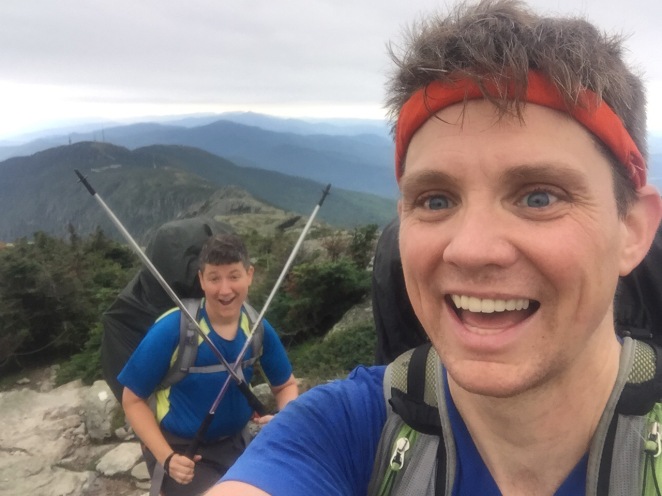 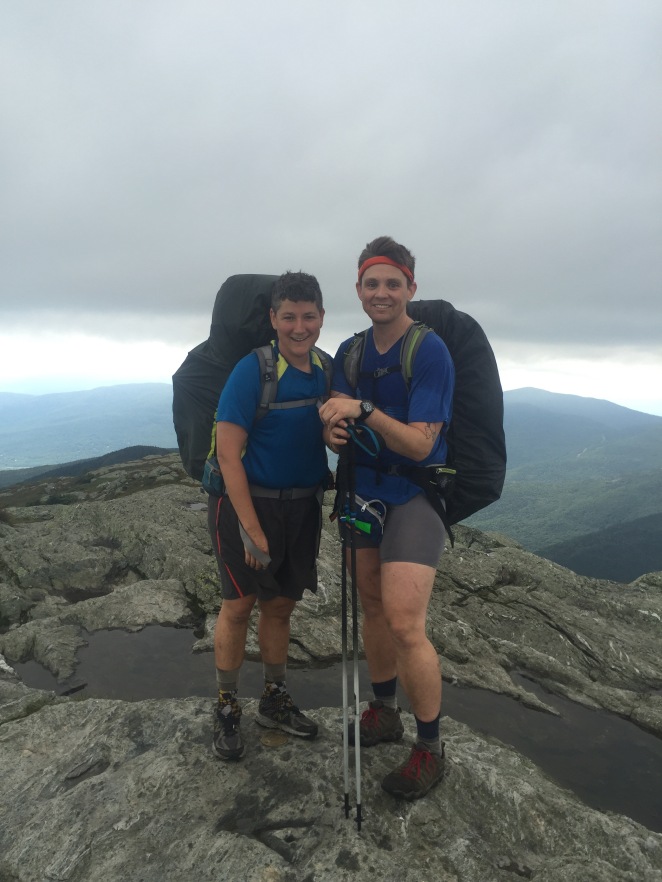 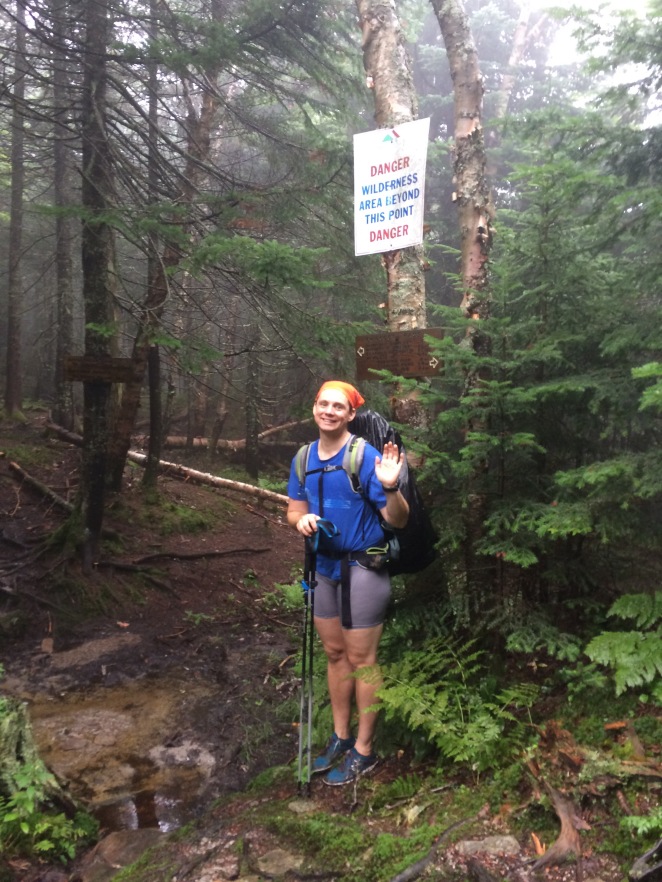 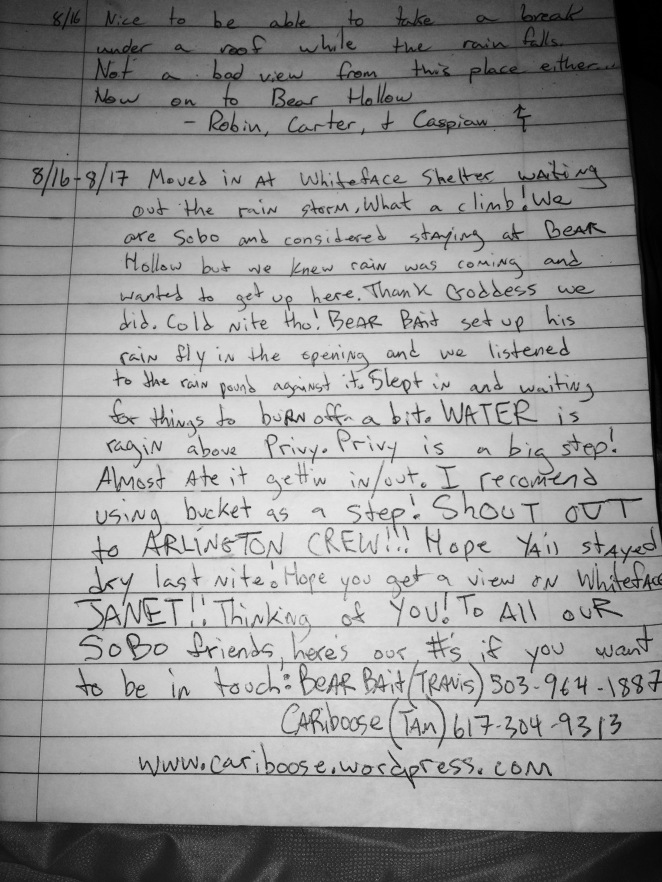 23 thoughts on “﻿The Lamoille River Valley to Appalachian Gap: 60 miles”